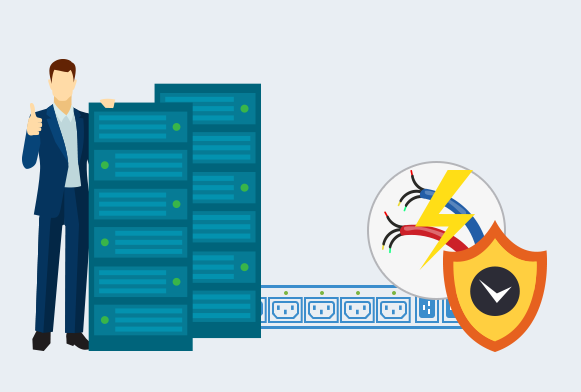 A short circuit is one of the most unpleasant things that can happen when specialists are using an equipment.

This happens rarely, but certainly. And it entails the painstaking task of having to locate it, which means services remain offline for a long time. And in a worst-case scenario, it can lead to a fire and considerable damage.

The most common cause of a SC in a telecommunications and server equipment is either an explosion or failure of the electrolytic capacitor, diode bridge, or high-voltage transistor in impulse power supplies.

What happens during a short circuit if a common ATS rack connected to a power distribution supply via inputs is used?

The problem doesn’t end, but only starts there, as turning on the switches requires firstly that the equipment where the SC happened is located and switched off. As a rule, the only practical way to locate it is to physically disconnect all power cables on the rack, turn on the switches, and then connect all power device cables until (!!!) the failed power supply is identified. When the cable to the failed power supply is connected, either another trip in the switches will occur, causing the entire equipment on the rack to turn off again (insofar as the SC has yet to be eliminated), or, in the best-case scenario, the engineer will see that the power supply didn't turn on.

What happens during a short circuit where RPCM is used?

If a short circuit occurs on one of the devices connected to RPCM, RPCM will automatically cut off only the power going to that device, thereby preventing the other connected devices from turning off, as well as all the others connected to the same busbar. Since ATS is used for backup power supply, short circuit protection helps prevent both inputs to the rack from being turned off, while also preventing the equipment's power supply on the rack from shutting down as a result of a short circuit on one of the consumers. It also helps obviate the painstaking process of having to locate the failed consumer affected by the short circuit prior to restoring power supply on the rack.